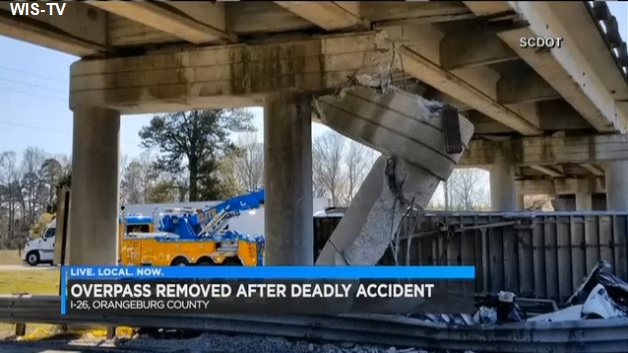 UIG Recognized: During the March 15 meeting of the South Carolina Department of Transportation Committee, officials paused to recognize the fast action of UIG and United Demolition in clearing a bridge damaged during a fatal big rig crash.

Ironic that, on a day when the South Carolina Department of Transportation Committee was scheduled to hear testimony about dealing with trucker fatalities on our roads, a fresh incident would be in the news.

At around 10am on Friday March 9, 2018 a 46-year-old trucker drove into the median on I-26 near Orangeburg, crashing into a support pillar on the Four Holes overpass. The bridge, as well as westbound I-26, were immediately – and indefinitely – closed.

Of course, these incidents are tragic for truckers and their families, as well as bystanders and other victims. But, a wrecked bridge and a closed Interstate can cause enormous disruption to local economies, as well. So, when an accident happens and infrastructure is compromised, action is immediate.

SCDOT put out the call, and United answered!

United Demolition, a division of United Infrastructure Group, Inc., is working through the night with plans to demolish one approach span, the westbound span and the median span of the bridge in hopes to open the westbound lanes to traffic by mid-morning Saturday. (Cody Crouch/SCDOT/Facebook)

UIG RECOGNIZED FOR ’ROUND THE CLOCK EFFORTS!

As these SCDOT pictures attest, United Demolition crews work around the clock clearing the damaged overpass.

It was an effort also recognized by the trade association the Carolinas Association of General Contractors (Carolinas AGC), who posted the following on social media:

UIG Recognized: During the SCDOT Commission meeting last week, CAGC Member United Infrastructure Group (UIG) was praised for working tirelessly the weekend before last to repair a bridge that was struck and damaged over I-26 in Orangeburg. The quick response and action by United Infrastructure Group was lauded, repeatedly, during the Commission meeting by the SCDOT Staff and SCDOT Commissioners.

United is glad to do its part in a tense situation. But we don’t want to forget the trucker, Mr. Travis Hall of Wagener, SC. Trucker fatalities are a problem that needs to be addressed, so kudos to the SCDOT for giving it the attention it deserves. And thanks to our industry partners at Carolinas AGC for recognizing our clean-up efforts!

And, as always, United Infrastructure Group is hiring! Check out our Careers page!